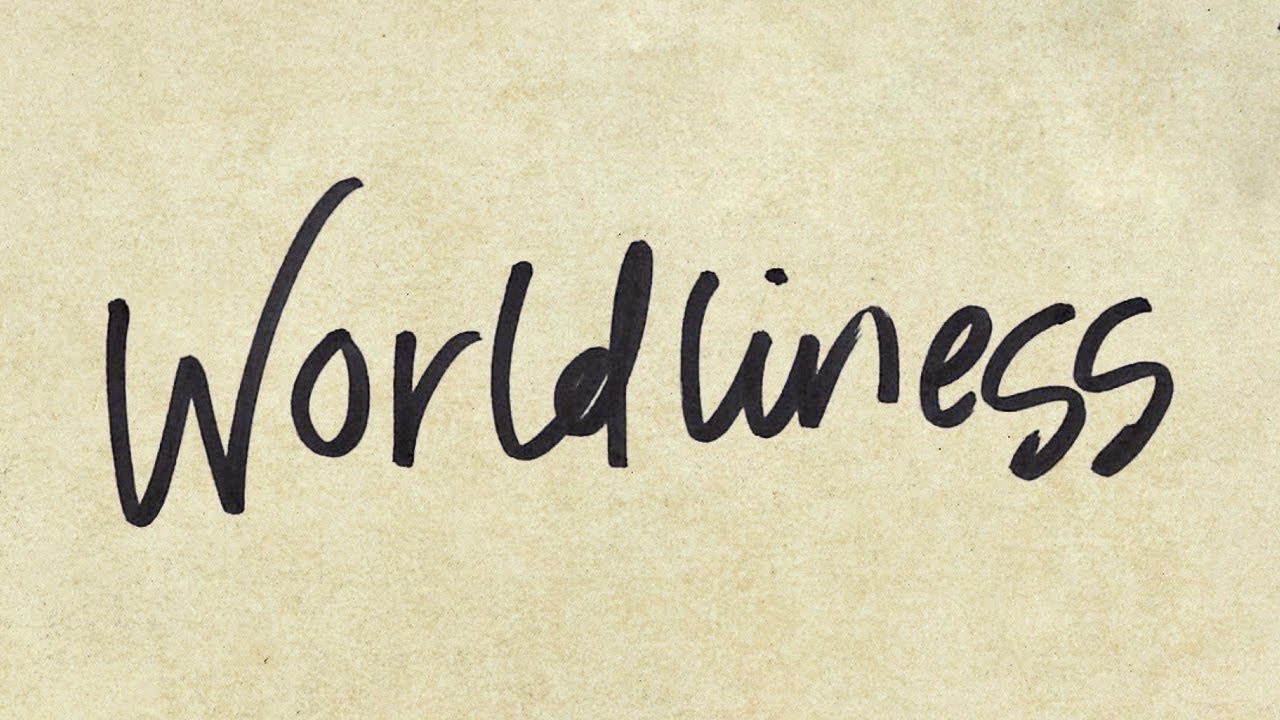 “This is pure and undefiled religion in the sight of our God and Father…to keep oneself unstained by the world.”

Worldliness is a problem because the world wants to stain you and it’s a problem you should be concerned about because as James explains worship that God accepts comes from people who keep themselves unstained by the world.

So the stakes our high.

It is possible to engage in religious activities while being stained by the world.

As one man writes,

“The nation of Judah was sunk in corruption and oppression, bribery was rampant, and the legal system a tool of despoliation.  Economic crime and murder abounded and government officials committed criminal acts.  Yet with all this the official religion of the nation, the temple worship of the Creator of the universe flourished.  People took part in the cultic observances of the God whose laws they had come to despise.”

They claimed to worship God while living for themselves.

And you know what?

God hates that kind of worship.

He says, “Bring your worthless offerings no longer, incense is an abomination to Me.  New moon and Sabbath, the calling of assemblies – I cannot endure iniquity and solemn assembly.’ (Is.1:13)”

But worldliness is not just an Old Testament problem.

Paul says in Philippians 4:18,19 “Many walk of whom I often told you and now tell you even weeping, that they are enemies of the cross of Christ, whose end is destruction, whose god is their appetite, who set their minds on earthly things.”

Many people are worldly.  Not just those who are outside the church.  Many professing believers lives are stained by worldliness.

That’s why the apostle John has to give this urgent admonition, “Do not love the world, nor the things of the world.  If anyone loves the world, the love of the Father is not in him.”

In fact, I am afraid, many professing believers have failed at just this point.

They don’t abandon worship. They come to church.  They go through all the motions.  But what they do on Sunday morning has nothing to do with the rest of their lives.  As one writer explains, they fail to understand that their worship service on Sunday mornings completely repudiates the way of life they uphold throughout the week.

In the other words, they are  just as worldly as the world.

The truth is, many are outworlding the world.

“Over a decade ago, Professor Martin Marty, always a shrewd observer of the American church said in a magazine interview that in his judgment, evangelicals would be ‘the most worldly people in America’ by the end of the century.  Marty’s observations are not always right in my opinion, but in this case he was on target.  Evangelicals have embraced worldliness in the same ways that it was embraced by liberal churches.”

“Instead of the churches revolutionizing the culture, the reverse has happened.  Churches have been converted to the world…the stream of historic orthodoxy that once watered the evangelical soul is now dammed by a worldliness that many fail to recognize as worldliness because of the cultural innocence with which it presents itself.”

Worldliness is a problem.

To answer that question, obviously you need to know what worldliness is.

The Greek word James uses for world is ‘kosmos.’

Sometimes it is used in Scripture to describe the physical universe itself, things like stars and planets, and the earth.  Obviously that’s not how James is using the term here.  He’s not talking about grass stains. This term kosmos is also used throughout Scripture to describe a way of thinking about life, and a way of living one’s life.  As one Greek dictionary defines it, the world is “the system of practices and standards associated with secular society (that is without reference to the demands and requirements of God.)”  The world represents apart from God thinking and living.

“Is departing from God.  It is a man-centered way of thinking.”

Or as David Wells writes, “Worldliness is that system of values and beliefs, behaviors, and expectations, in any given culture that have at their center the fallen human being and that relegate to their periphery any thought about God.  Worldliness is what makes sin look normal in any age and righteousness seem odd.”

You see, there are two ways of viewing life.

One is from God’s perspective, which is revealed in the Word, and the other is man’s perspective, which is revealed in the world.  God has a worldview, and He presents that worldview in the Scripture.  Unregenerate man also has a worldview.  He lives his life according to Galatians 4:3 in bondage to the basic principles of the world.   And these two perspectives, God’s and unregenerate man’s, are not neutral towards one another as some seem to think.  They are opposites.  What is of the world is not of the Father, and what is of the Father is not of the world.  The apostle John explains, “Do not love the world, nor the things in the world.  If anyone loves the world, the love of the Father is not in him.” (1 John 2:15)  The two cannot co-exist.

In fact, I think this is one of Satan’s great strategies.

Many people hear James say ‘keep yourself unstained by the world…’ and they automatically think, ‘Great I am doing that.  I don’t drink, I don’t smoke, I don’t go to bad movies. Therefore, I’m not worldly.’  But worldliness, being stained by the world, is something much bigger than not drinking and not smoking and not going to bad movies.  You can avoid movies, wear plain dresses and live in a monastery in the wilderness and be as worldly as a person who does all these things, because as John MacArthur puts it, “Worldliness is the sin of allowing one’s appetites, ambitions, or conduct to be fashioned by worldly values.”

I am saying, worldliness is a way of thinking, a way of looking at life

It is about more than what you do or don’t do. It’s about what’s going on in your heart.

You know, James uses different language but makes the same point over in 4:4, “You adulteresses, do you not know that friendship with the world is hostility toward God?  Therefore whoever wishes to be a friend of the world makes himself an enemy of God.”

An enemy of God!

It’s dangerous, and in our next post, we’ll see just how dangerous being worldly can be.

Speak Truth at All Costs

What to think when others don't think much about you

A Process for Discipleship Pt.1